skip to main | skip to sidebar

There was plenty of indignance splattered across social media on Sunday night during Andy Murray's semi-final against Roger Federer at the ATP World Tour Finals in London.

Some of the most authoritative voices in the British tennis press shook their heads collectively at the temerity of the British crowd to boo one of their own and cheer Federer - a man who's from (gasp!) Switzerland.


So what if British people want to jeer someone who happens to have been born on the same island as them? Tickets for last night's match were going for an average of £159 - not small change for those who aren't lucky enough to be paid to travel the world and watch the best players.

Admittedly some of the negativity towards Murray from spectators was, at times, brutish, but I say that those people who work hard and spend their money on a night out watching some sporting entertainment in South London can side with (or against) whoever they want.

If they are advised to always root for whatever has 'GBR' in brackets next to it they'll soon be bound by the type of blind loyalty that has got football into so much of trouble during the last year.

It's also hugely important to consider who was on the other side of the net from Murray. No one in tennis generates the kind of superstar delirium that Roger Federer brings out in his fans. A man who has broken so many records that his CV makes for a dizzying read of statistics and records.

The 17-time Grand Slam champion has been winning tournaments around the world since 2001 and has shared his most euphoric triumphs and hollowest nadirs with his fans. As bizarre as it sounds, Murray's journey to etch his name firmly into the history books has only just begun following his remarkable 2012.

Get behind him if you want but do it because you like his personality and/or his ever-improving style of attacking tennis. Just don't be a patriotic sheep.
Posted by Jack Prescott at 08:35 No comments:

Reasons why I love David Bowie #485

On his mammoth 1974 tour to promote the album Diamond Dogs, David Bowie began the first leg with the usual Glam theatrics he was dealing in at the time (an over-the-top re-creation of 'Hunger City', the setting of the Diamond Dogs album; a cherry-picker he sat on which went over the crowd; singing into a telephone etc.) However, by the time the second leg kicked off in LA, Bowie had acted on his nascent obsession with Philadelphia soul music by transforming the show into more of a soul revue, stripping away any pretence and often featuring a stark white backdrop in front of which he almost carried out a one man show.

Changing the whole set and feel of a tour halfway through is pretty radical and something promoters of acts as big as Bowie (if there are any) simply wouldn't stand for today. The fact that many American concert-goers were expecting one thing but were given something completely different demonstrates Bowie's relentless imperative to act upon whatever took his fancy at the time. Also he managed to complete the tour on a diet of red peppers, milk and, most importantly, cocaine. What an engine.
Posted by Jack Prescott at 10:05 No comments:

The Magic of Rogers, Edwards and Thompson

Stepping into the studio to follow up her self-titled 1983 debut, Madonna sought the help of Chic bandleader Nile Rodgers to propel her career to the stratospheric heights her psychotic (never mind blonde) ambition demanded.

Rodgers called upon his Chic associates Bernard Edwards (bass) and Tony Thompson (drums) to help create Like a Virgin (1984), an album which my mind instantly jumps to when thinking about what a great pop record should be.

An all-time favourite of mine, and one which appears on the album, is Material Girl, a track which demonstrates Rodgers, Edwards and Thompson as the impossibly water-tight rhythm section they were.

It's tacky, it's gimmicky, it's pure bubblegum and for these very reasons it's a damn fine single.

What's always impressed me with this song, however, is Tony Thompson's drumming. Rock solid for the verses, his snappy flourishes before the chorus puts one foot of this song in territory clearly marked 'Rock'.

Does it get more perfect than this?

Posted by Jack Prescott at 06:41 No comments:

Wake Up: A new found appreciation of Arcade Fire 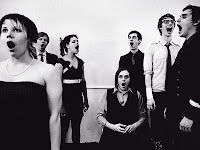 For a long time now I've tried my hardest to resist Canadian band Arcade Fire. I'm a stubborn bastard and their perceived infallibility mixed with the hysterical popularity they garner plays right into my hands. Hands that love to play devil's advocate.

But the devil will find work for idle hands to do and on being given all three of the band's studio albums to borrow I've found myself succumbing to their indefineable magic.

It's the passion. In an age which is one huge, non-committal shrug of the shoulders, Arcade Fire have a startling intensity about their music. It's rousing, it's enervating, it makes so many other mainstream acts sound like dilly-dallying time-wasters. You can hear that they mean every measure of tape they lay down and are no strangers to some good old-fashioned hard work.

There's not much more I can say, really, because I don't think they deserve to be ham-fistedly dissected by me. However, a current favourite is Intervention from 2007s Neon Bible. If this doesn't stir you, nothing will.


Now to try and like Animal Collective...
Posted by Jack Prescott at 07:58 No comments: 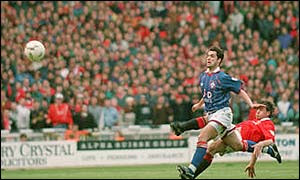 It's FA Cup semi-final weekend and I was looking on the Guardian's website at a great Joy of Six article highlighting some majestic semi-final moments. It's the sort of writing which makes the hairs on the back of my neck stand up; dramatic descriptions of true footballing heroes and their super-human exploits on the field. (the segment about Bryan Robson is excellent.)

Ryan Giggs' bob and weave against Arsenal gets the inevitable mention but, despite being one of the great semi-final strikes, I put another on par with it.

Mark Hughes' volley against Oldham for Manchester United in the '94 semi embodies everything which makes Sparky one of my favourite ever United players.

The Guardian article cites context as being vital in the compiling of their list and this goal features the sort of heart-stopping drama which United made their own in the 1990s and beyond.

After a dull 90 minutes Oldham went ahead in extra-time when Neil Pointon stabbed home after an uncharacteristic Peter Schmeichel flap. With a minute left, and United running out of ideas, Brian McClair looped a desperate ball over his shoulder to ask questions of the Oldham defence. Muscling his way between a couple of defenders it dropped to Hughes who pulled the trigger on that pneumatic right foot of his to keep United's double dream alive.

It was so typical of the Welshman. He was a warrior, always ready for battle and always putting his body on the line for the good of the team, commitment never a question. Sir Alex Ferguson once said you could put your life on Hughes scoring when you needed a goal and here he drew on all his bravery and supreme vollying technique to take the tie to a replay (which United ran out 4-1 winners). God, I love Mark Hughes.

Posted by Jack Prescott at 07:03 No comments:

Lyric of the Week

Clutching at straws? Most likely. But I've been listening to a bit of Nick Cave recently (both with the Bad Seeds and his 'other' band Grinderman) and it is on a song from Grinderman's second album, Grinderman 2, which has found me laughing to myself on the bus, getting a couple of odd glances in the process.

The song is Kitchenette, a classic Cave tale of adultery, lust and death, and the lyrics in question are:

I keep hanging around your kitchenette
And I'm gonna get a pot to cook you in
I stick my fingers in your biscuit jar
and crush all your gingerbread men...

Menacing enough, but the lines which have brought me much mirth are:

Posted by Jack Prescott at 03:12 No comments:

Having dipped right into all that is synth- and electro-pop recently (I found Dare by the Human League at a car boot sale on vinyl) I decided to look up a documentary BBC4 showed called Synth Britannia.

I can't remember when it was first shown but it isn't on iPlayer anymore. Instead, I found it on Youtube and have pasted the links to all six parts. Don't worry, its only an hour and a half long (not long enough for me, though) and covers the genre's beginnings in 1970s industrial England through to inadvertently providing the soundtrack to the social upheavals of Thatcher's Britain. I think its a great documentary and expresses how significant, irreverent, varied, daft and creative the genre was (and still is considering the synthesiser has been reigning supreme for a number of years now). Enjoy.

Posted by Jack Prescott at 05:17 No comments: